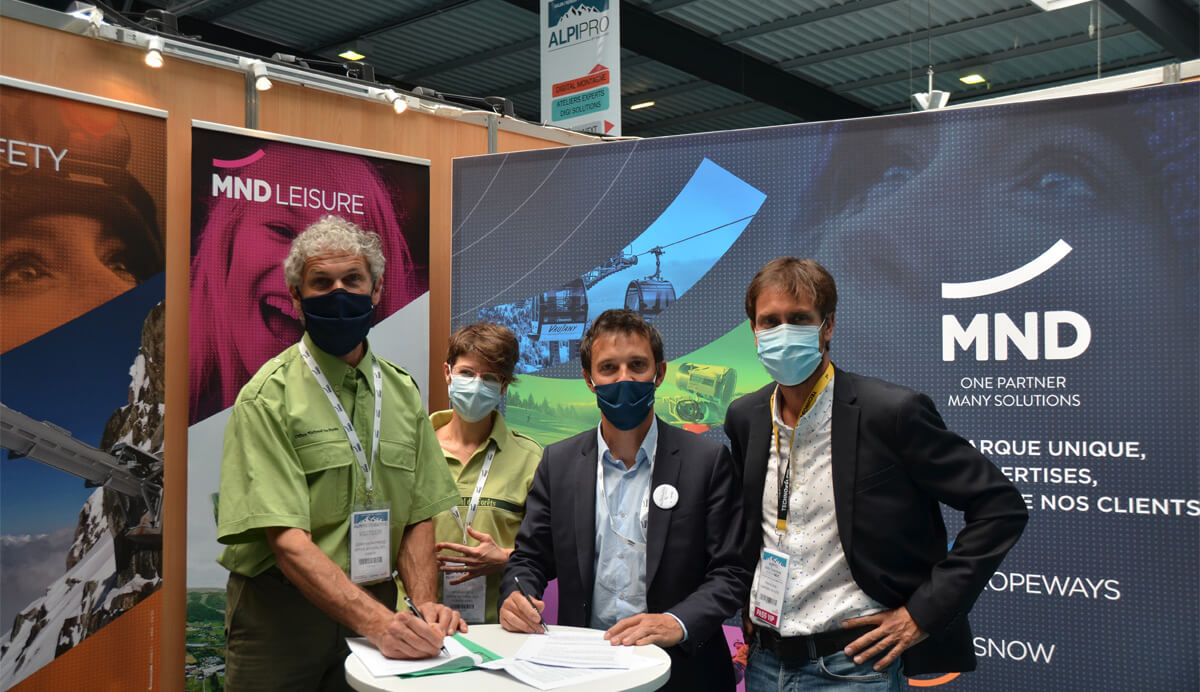 MND commits to the French NFO

MND, a specialist in ropeways mobility, snowmaking systems, mountain safety and thrill-seeking leisure infrastructures, has announced the signing of a partnership with the French National Forest Office (ONF) in favour of public forests and natural mountain areas. Two projects, in Tignes and Villard-Sallet in Savoie region, near MND headquarters, will be launched in 2021.

As a major player in mountain development, MND is very attached to its location in Savoie and the Alpine territories. MND shares with the ONF the desire to fight against global warming in a concrete way in the Alps. Thus, a partnership has been concluded between the two parties through the signing of an initial three-year agreement, in order to provide long-term support for the reconstitution or strengthening of existing forests. Each co-financed project will be handed over to the local forest communities concerned, which will ensure its sustainable management as part of their natural heritage. This significant partnership is the first between an industrial company based in Savoie and the ONF.

In a desire for sustainable development, MND and the ONF have chosen to contribute to multi-year projects, the first two of which are starting this year with the agreement and support of the forest communities concerned in Villard-Sallet and Tignes.

Reconstruction of a diversified forest and environmental awareness in Villard-Sallet, a territory close to MND’s headquarters

The small communal forest of Villard-Sallet is a lowland forest located at an altitude of 400 metres, on the left bank of the Isère river, between Montmélian and La Rochette, in the heart of the « Coeur de Savoie » community of communes, near Chambéry. The forest is suffering from rapid climate change, and 2 hectares of spruce stands were ravaged by bark beetles in 2019 following successive droughts and heat waves, forcing the trees to be cut down.

The commune of Villard-Sallet and the community of communes have mobilised in 2020 and 2021 to implement a planting project with the ONF that will enable the forest to adapt to global warming, strengthen carbon storage in this area already committed to a “positive energy” approach (TEPOS), and develop biodiversity by diversifying the species. In this project, MND will take part in a participatory event in the autumn of 2021 with schoolchildren to raise their awareness of the environment, and will then contribute in 2022 and 2023 to the upkeep of the plantations to ensure the sustainability of the young trees.

The Villard-Sallet project is co-financed by the community of communes for the supply of seedlings, and by the Institut Lumière, a partner of the ONF for the 11th year in 2020, for the upstream planting phase.

Creation of a new multifunctional forest at altitude in Tignes, near the Tignes Val d’Isère ski resort in the French Alps

The municipality of Tignes wishes to carry out, with the ONF, the afforestation of 4.5 hectares of slope visible from the road leading to the resort of Tignes, in the ski area of Tignes Val d’Isère. At an altitude of more than 2,000 metres, these 4.5 hectares of future afforestation have four objectives: to slow down snow flows, to create a refuge area for birdlife and the emblematic Black Grouse, to store carbon in the long term and to enrich the resort’s landscape.

The establishment of this forest will be based on mountain restoration techniques with the planting of trees in groups, on benches sheltered from skiers, and the reptation of the snow by custom-built wooden bows. As part of this project, MND will participate from 2021 to 2023 in the planting and protection of more than 3,000 trees divided into a hundred collectives (tiered micro afforestation) designed to withstand the difficult local conditions.

The Tignes project is also supported by the company in charge of the ski area’s lifts, the Société des Téléphériques de la Grande Motte (STGM) in Tignes, a subsidiary of « Compagnie des Alpes ». The Tignes ski area’s investment in sustainable development is recognised by its Green Globe certification since 2015. The STGM has therefore chosen to make a local commitment with the ONF alongside the municipality of Tignes and MND to support the creation of a future high-altitude forest for 3 years.

For 2022 and 2023, a third site is being studied in the Tarentaise region in conjunction with the municipalities concerned, for an additional project.

These first two projects in figures:

In France, with more than 70 million tons of CO2 captured each year, forests are the main vector in the fight against global warming. In Auvergne-Rhône-Alpes, the public forest represents nearly 600,000 hectares and contributes to saving more than 3 million tons of CO2 each year, through sequestration, long-term storage in wood products and substitution for non-renewable materials.

In the mountains, the forest provides many other fundamental services, in particular: refuge for biodiversity, protection against natural risks, quality of the landscape and water, reception of the public for outdoor activities or to recharge their batteries. The forest is in itself a nature-based solution to society’s challenges.

In the mountains, as elsewhere, climate change has triggered an international health crisis, although less visible than the retreat of the glaciers and still little known to the general public. The combination of heatwave and drought is directly affecting almost all tree species and is leading to the short-term death or rapid decline of trees due to the proliferation of diseases and pests. While some forests in eastern France have already been destroyed over thousands of hectares, the impact is still discreet in Savoie for the less discerning, even though more than 400 hectares have already been identified as needing to be reconstituted or adapted. The scientific findings are clear: change is too rapid for the forest to adapt on its own and continue to play such an important role in our territories.

The ONF is a major player in the forestry and wood industry in France and is present in metropolitan France and overseas. On a day-to-day basis, the foresters’ work is based on three inseparable objectives: timber production, environmental protection and public access. The Office also carries out public service missions in the field of natural risk management, and offers services to communities and companies

お気軽にお問い合わせください
お問い合わせ
お問い合わせ
お問い合わせ
お問い合わせ
MND uses cookies on this site. With your consent, we will use them to measure and analyze site usage (analytic cookies), to tailor the site to your interests (personalization cookies) and to present you with relevant advertising and information (targeting cookies).
J'accepte Personnalize